France is much better known for its wine than its beer. For good reason: the wine is delicious, and the beer is generally terrible.

La Cagole de Marseille. Honestly one of the worst beers I have ever had

You have been warned: do not drink this beer. It is horrible. I’m actually not sure it’s technically beer; the ingredients list does not even include hops. It just tastes like sugary malt and food coloring. Avoid. 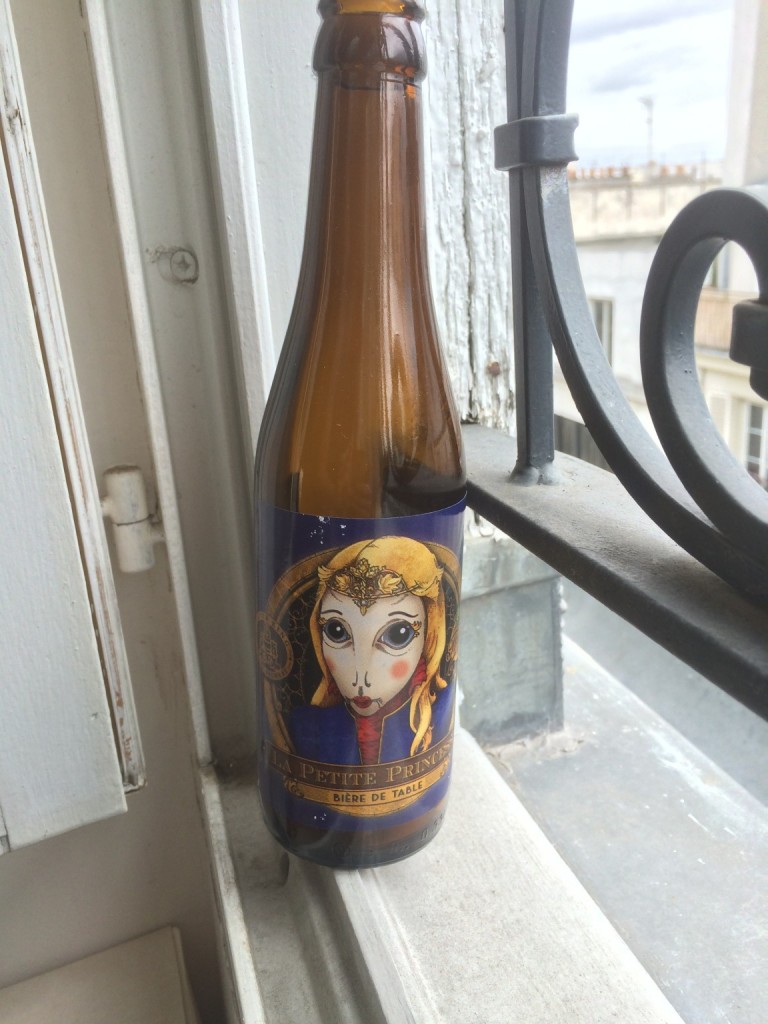 This beer is actually delicious.

This is a much more enjoyable brew.  It’s a collaboration between Thiriez and Jester King. Thiriez is kind of the OG of French craft brewing that does mostly lighter hoppy things.  Jester King is a Texas institution that specializes in saisons and sours. The result is about what you’d expect:a hop-forward saison that’s light, balanced, and super drinkable (especially with that sessionable 3% abv).  I wish this is what Heineken tasted like. 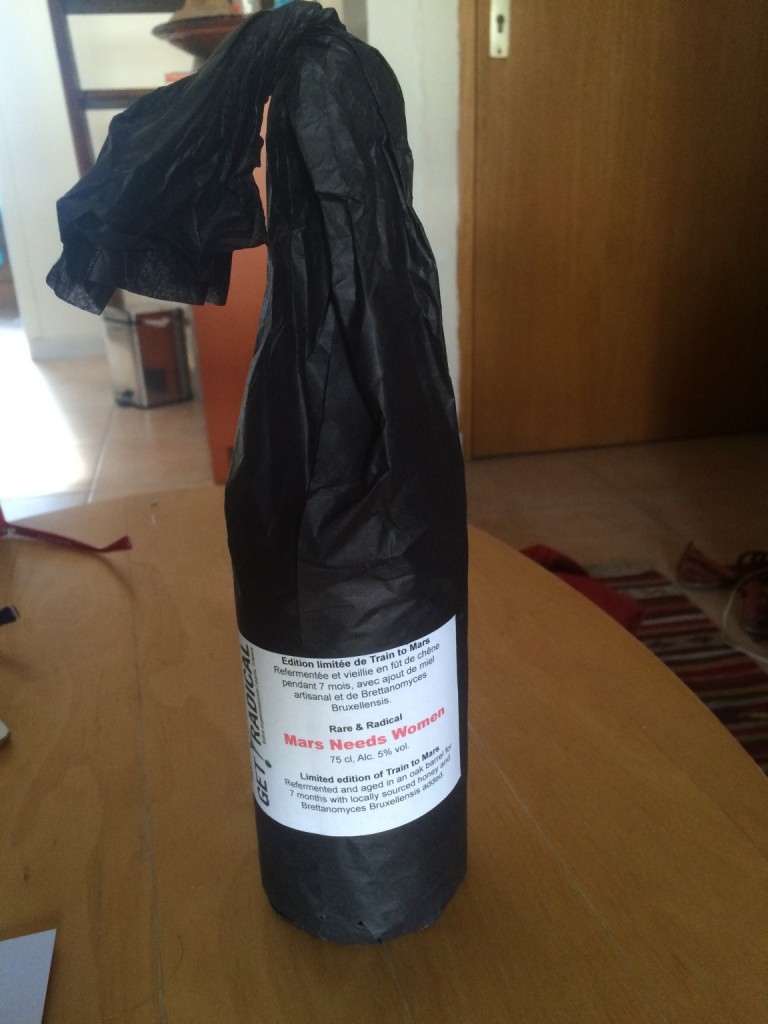 This beer is… different. It’s brewed on Thiriez’s equipment in collaboration with a couple of guys at La Cave a Bulles (a Parisian bottle shop) under the label Get Radical.  This particular beer started as Train to Mars, then went into secondary fermentation with brettanomyces and honey in an oak barrel.

The brett character is there but not overwhelming, but something (maybe old hops plus honey?) introduces a really strong basil note to the beer. We paired it with some stinky cheese/bread/tomatoes and it was a perfect accompaniment. I’m not sure how much I’d enjoy it without food to balance the herb notes, but it’s good at a picnic. 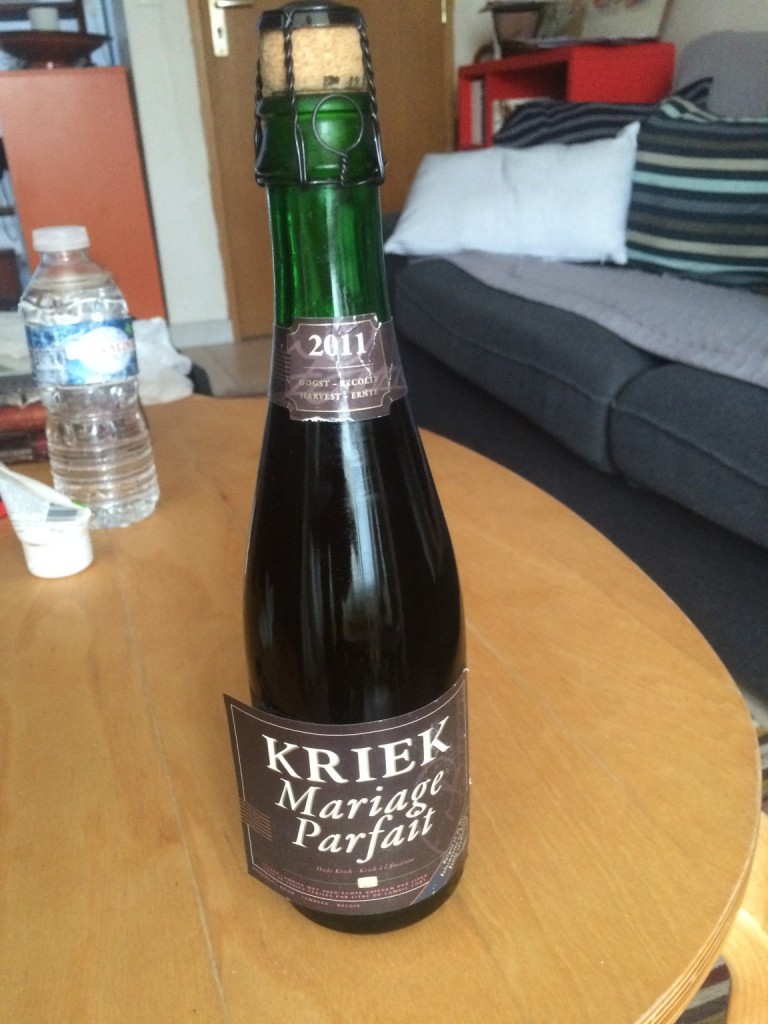 Okay, this one’s not actually French.  It’s brewed by Boon in Belgium. Mariage Parfait is their premium line, (lit: “perfect marriage”), and Kriek indicates cherry’s added. In this case, there’s about a third pound of cherries for each 375ml bottle, or 3.3 lbs/gallon.

I was a little nervous about this particular bottle; we picked it up in a little shop in Paris that was well stocked but poorly climate controlled (and this was on the top shelf). It’s a continual heat wave, and it was a little sticky in there – you can see the label was peeling off.

This beer was brewed in 2011 and had been sitting in the bottle for another 2 years after the brewery released it. The extra age was intriguing to me, for reasons I’ve outlined previously, but I wasn’t sure if high temperatures might have damaged it.

The cork blew off as soon as I loosened the cage, which is something I have not had happen to me before.  Definitely a live one. Once into a glass, it was clear my fears were baseless. It is pretty much a perfect Kriek. Lots of ripe cherry flavor, not too sweet, and well balanced by geuze funk. Plus a ton of carbonation. I wish I had bought all the ones on the shelf.

Protip: Boon Oude Geuze is one of the easier to find Belgian Geuzes. You can pick it up at Whole Foods in most states; some of them even get the Mariage Parfait line. 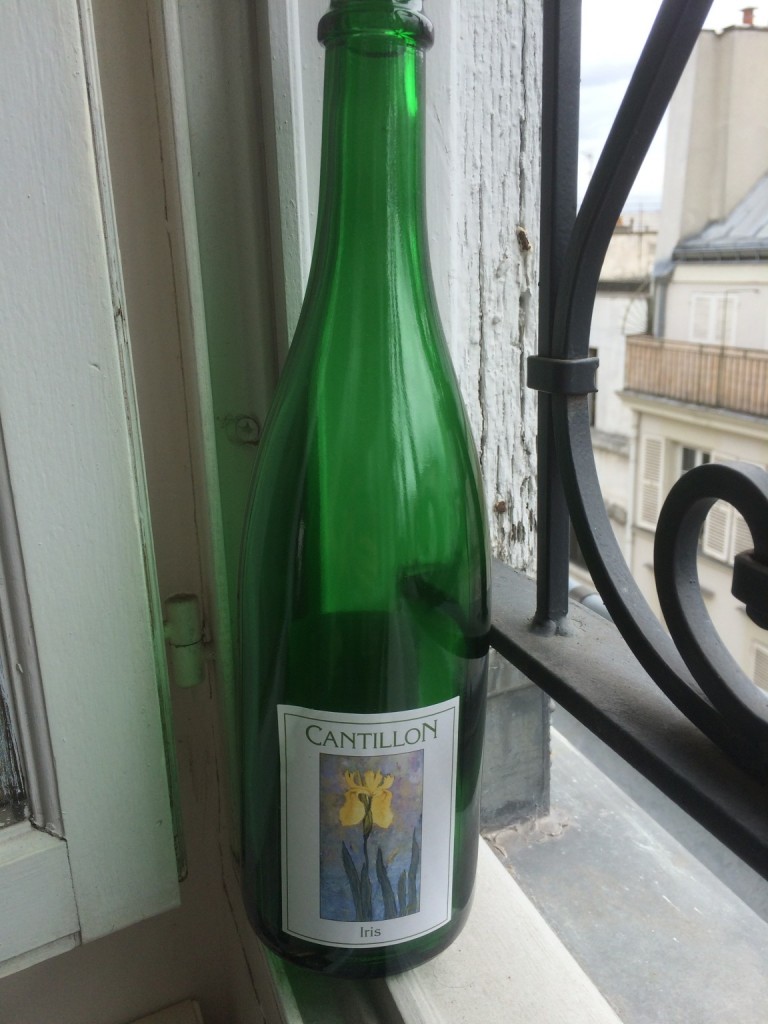 Another Belgian. Cantillon’s Iris is a bit of an odd-ball. It’s spontaneously fermented, but uses a different grain and hop bill from the rest of their lambics. It’s not blended, so it’s not a geuze. They also dry hop for two weeks immediately before bottling. The result is a beer with character notably different from Cantillon’s other offerings.

I am not a hop head, and expected not to like this as much as their other stuff, but was happily wrong. The hops are present but not overwhelming, and enhance a lot of the notes from the lambic. Quite a nice beer if you can get it.