The Blue Fox is a hotel bar. I point this out because hotels are places where all kinds of people go. Including the kinds of people who would order a Cosmopolitan, or a Midori Sour. Which is all to say that from the get-go, hotel bars are a little bit hamstrung by the need to pander to a broad range of clientele used to sucking down syrupy abominations.

Does the Blue Fox succeed in rising above in the face of this adversity? Read on to find out. 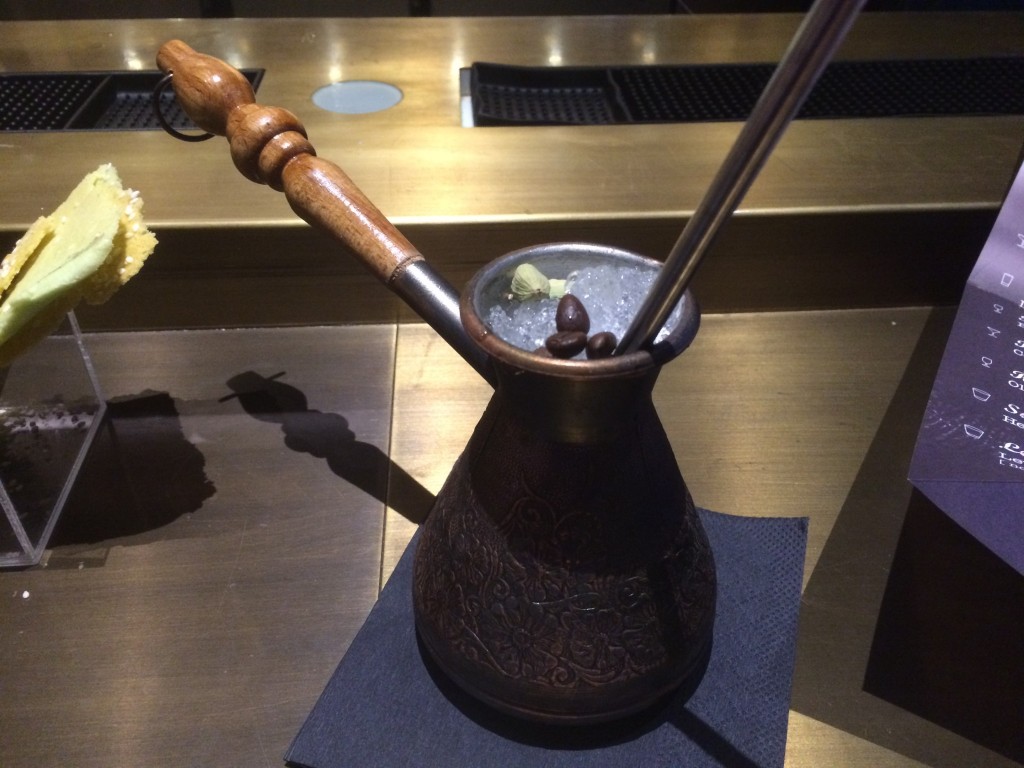 I need to get one of these

First off, I love the presentation. Taking a sip through a metal straw while raising the drink through a long wooden handle made me feel like Gandalf smoking a pipe.

The drink description sounded enticing. Saffron gin, nut coffee, cardamom.  Swizzle is usually going to describe something from the Tiki family; the Queens Park Swizzle is perhaps the most famous. The traditional swizzle stick is actually cut from a plant indigenous to the Carribean (cocktail nerds with more money than sense can even buy an authentic swizzle stick on the internet).

I came in expecting a clever concoction marrying the spices of the islands with a gin base and coffee accent. Instead I got a one-note coffee drink that was a little on the sweet side.  It wasn’t a bad drink, but it fell far short of its potential. That said, I’d still happily go drink one again to recapture that feeling of arcane wizardry. 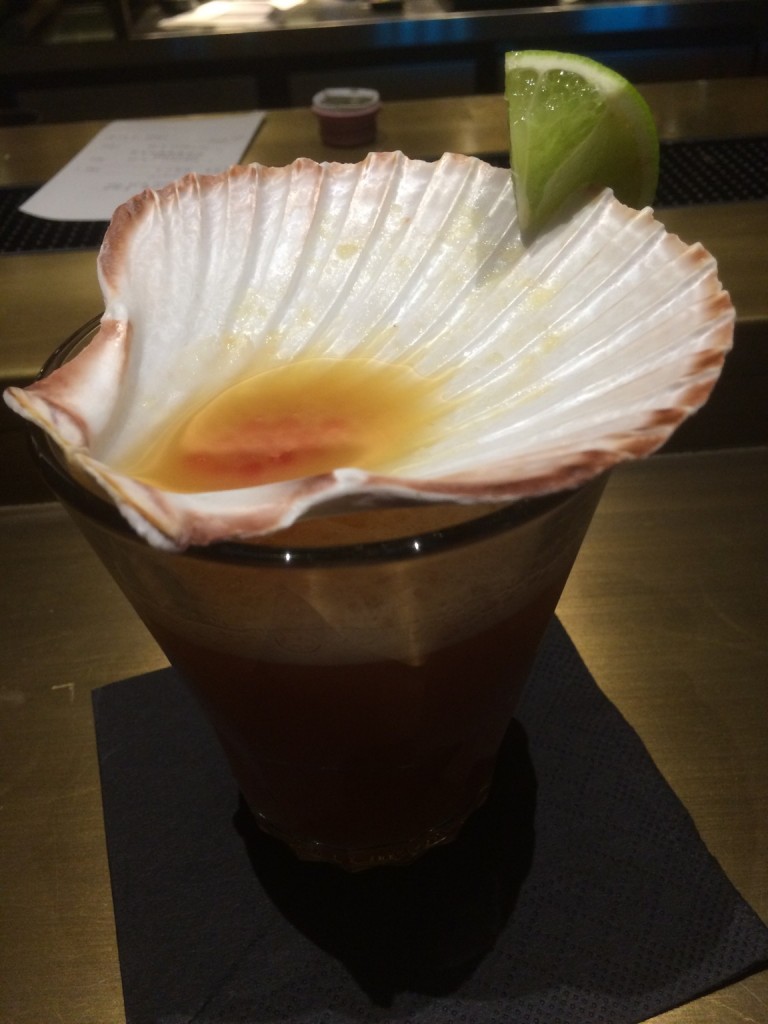 The Blue Fox menu is divided into two sections; reinterpretations of classics, and original drinks. The classic Clover Club is gin, lemon juice, and raspberry (plus egg white for texture). The menu listed the same ingredients (sans egg white). The drink showed up with a molecular gastronomy flourish of some “caviar” made of raspberry jam in some sweet liquor. It looked nice, but the caviar was hard to drink and just tasted like sugar. The drink underneath was similarly sweet, lacking sufficient citrus to balance it out, and with raspberry flavor barely in evidence. Without Tolkeinesque barware to save it, this drink was a miss. 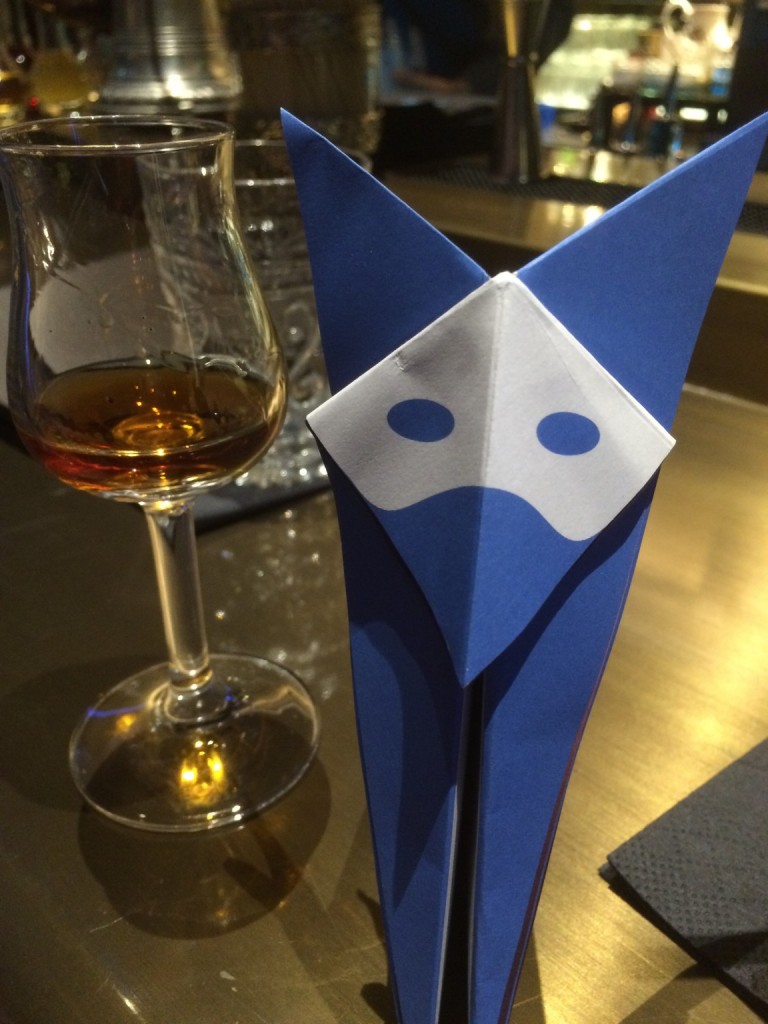 Before I talk about the glass of alcohol, let’s take a minute to admire the branding work. That adorable blue fox is actually a folded up drink list. After we declared our intention to pay, the bartender quickly folded the little critter out of what otherwise looked like a normal (if square) seasonal drink menu.  It was both unexpected and delightful, characteristics I wish they had applied to their drinks.

On to the little taster glass. We’d been chatting with the bartender a lot, and as with many places we’ve been, he comped us a little treat when we closed out our bill.  Apparently one of the two bartenders had a grandmother with an Amaro recipe, and they had a stock of the finished product behind the bar. This stuff was excellent. Every bit as good as any commercial bottling, better than most. Of the amari I’ve tried, it was closest in flavor to Nonino.

As I mentioned at the top, hotel bars have a real challenge; they need to put together drinks that look and sound impressive, while not doing too much to challenge the palates of the average guest. True to form, the presentation was great, but the cocktails we tasted were too sweet and one-note. It may be that we chose the wrong drinks – the bartender we talked with seemed knowledgable and capable, and the off-menu house-made amaro was straight up delicious.

If you do find yourself at the Blue Fox, it might be worth asking the bartender to make you something complex and not overly sweet. It might even work.

As for me, I’m not going back.