Le Syndicat is a bar making new cocktails from classic french ingredients. They are killing it; these drinks were the best so far. 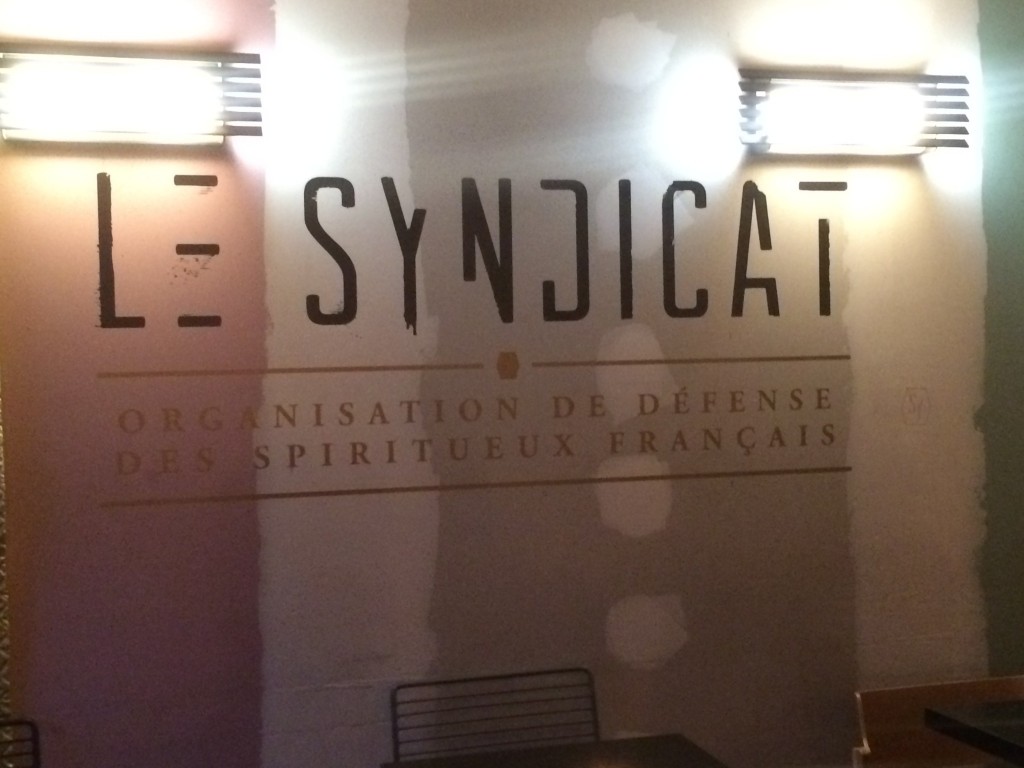 They are serious about French ingredients

France is famous for making great liquor out of great fruits. Cognac and Armagnac (grapes), Calvados (apples and pears), and other eau de vie (fancy phrase for “distilled fermented fruit juice”). Until recently, they haven’t been doing a great job of taking these products and turning them into great cocktails. That’s where Le Syndicat comes in. They offer five reinterpretations of classic cocktails, plus five original creations, all made using 100% french ingredients, fresh juices, and house made syrups, smokes, and foams. 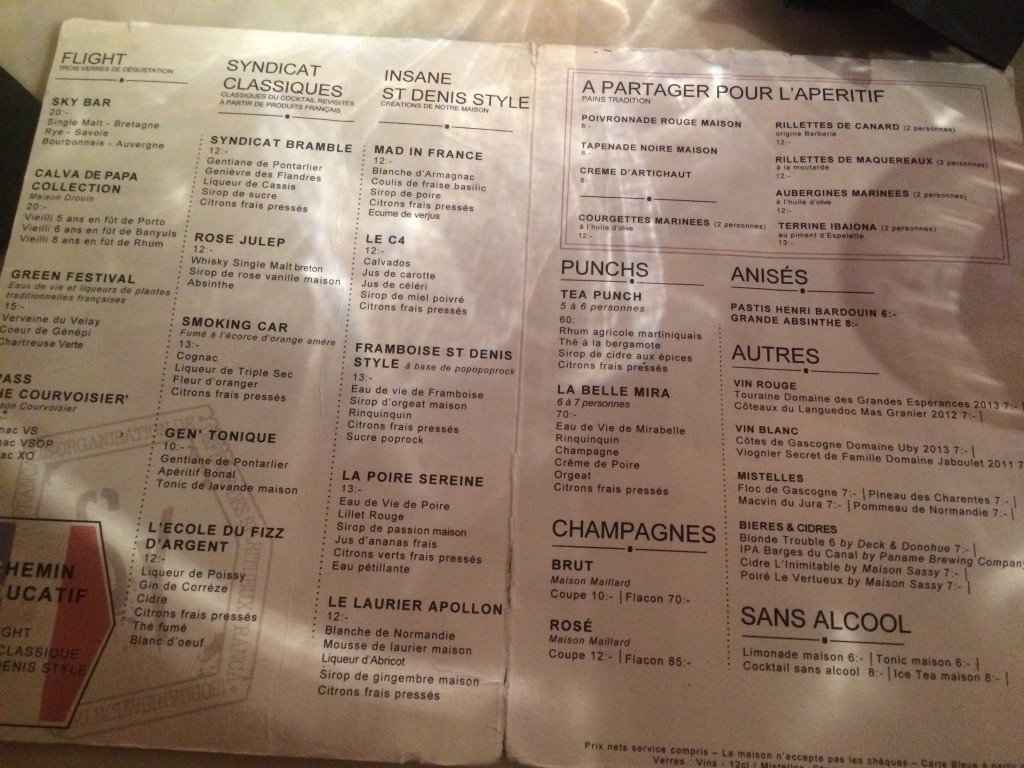 So many tasty drinks

We started off with two from the “Insane St Dennis Style” column; Mad in France, and Le Laurier Apollon. 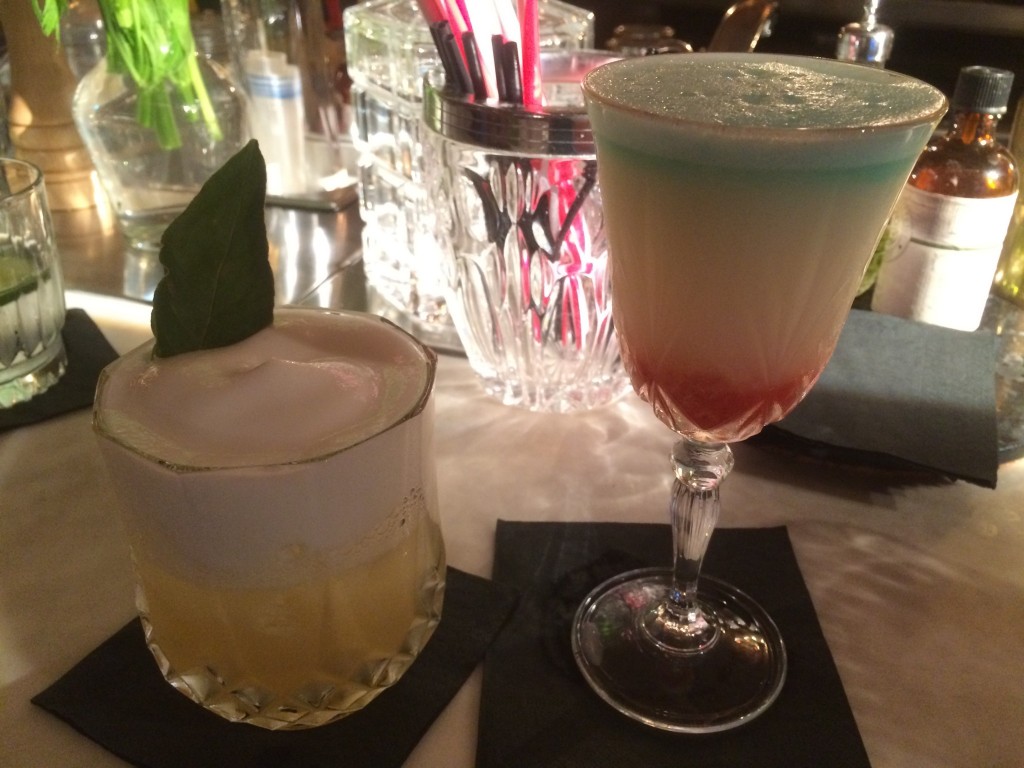 So much to say. To start, Mad In France looks incredibly gimicky right? When I see a drink that looks like a popsicle, my first instinct is to stay the hell away. In this case, I would be wrong. This one is a little three course meal. The blue is a verjuice foam (don’t worry, I had to look it up too), a tart first sip that wakes up the palate. It blends smoothly into the white, a balanced cocktail of pear syrup, citrus, and armagnac. The drink finishes with a tasty strawberry basil syrup to wrap up your meal.

Le Laurier Apollon is a calvados and ginger driven drink with an herbal foam. Keeping ginger in balance is not easy to pull off; it’s a strong flavor that can run away with your drink. Le Laurier Apollon gets away with it by bringing big juicy apple character from an unaged Calvados. It’s topped with an herbal foam that while tasty, is about the only thing I can criticize from this bar. It’s a little too thick (there’s a good 2 inches of it), which gets in the way of the tasty drink underneath. You either drink an inch of foam before your cocktail or end up looking like a reject from a certain 90s ad campaign.

The discerning spirit drinkers among you might have noticed these both use unaged spirits. Usually this is not a thing you want; aging rounds out rough edges of spirits, adds wood character, and generally brings out lovely caramel notes. If you’ve ever tried a white dog whiskey, you’ll know that some spirits should always be aged. It’s a different calculous with distilled fruit. Time in the barrel will generally mellow fresh fruit character, which may not be what you’re looking for when crafting a fruity cocktail. For these two drinks, using an unaged spirit is absolutely the right call.

We were so impressed by the first couple drinks, we had to split one more. Which brings us to this science experiment of a drink: 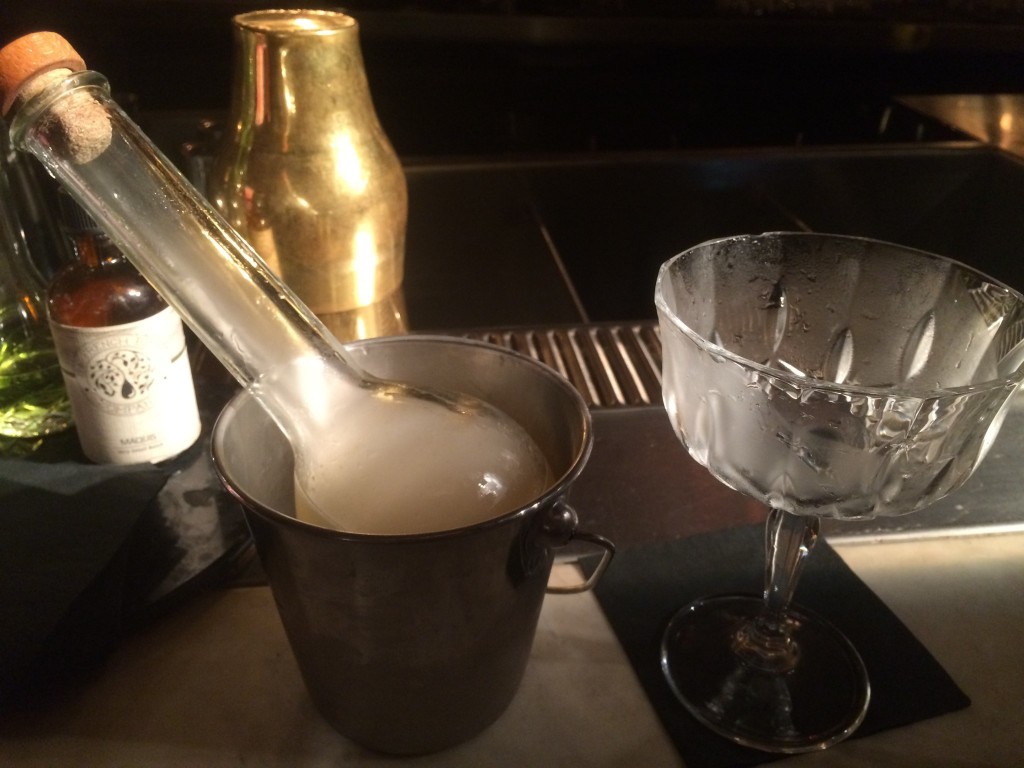 Smoking car, an impressive play on the cliasic sidecar

Our bartender started by filling a smoke gun with dried bitter orange peels, and filling up that beaker with citrusy goodness.  He then made a fairly standard sidecar (cognac, lemon juice, curaçao) with the addition of a dash of orange blossom water. The mixture was poured into the smoke, then corked to allow them to get friendly. Poured into the glass, the result is a sidecar with a subtle extra layer of burnt orange mixed in. I didn’t know a sidecar could be improved, but it can. This drink is awesome. 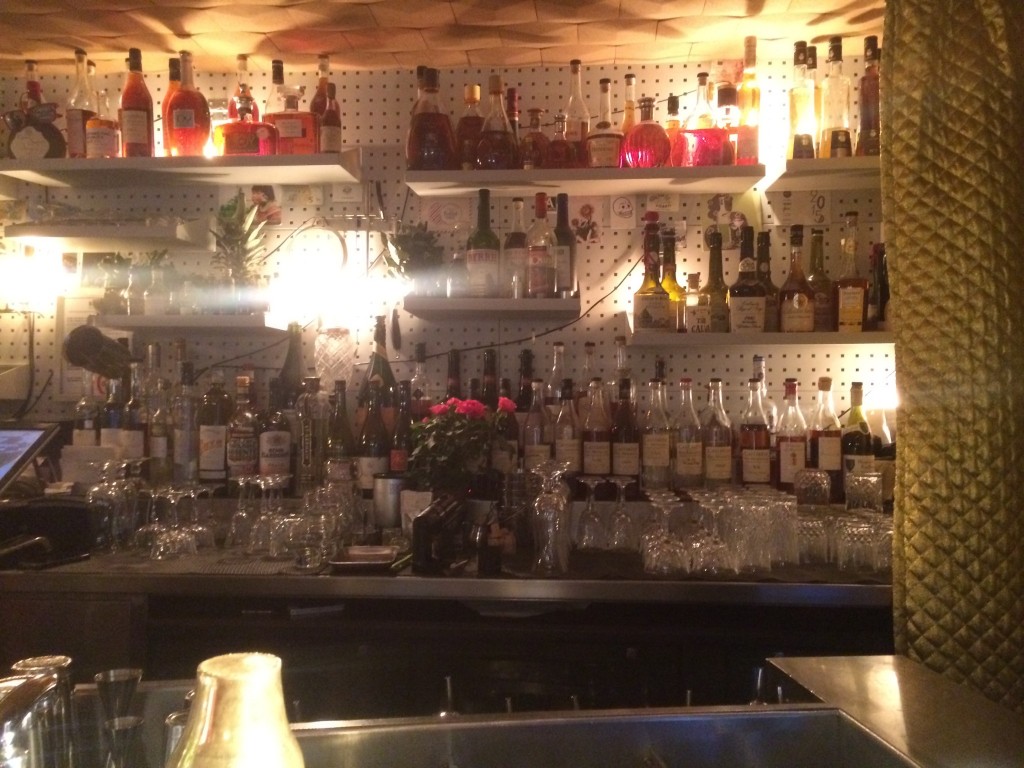 The bar. All bottles are made in France.

I’m usually not in to the molecular gastronomy stuff. It’s too easy to use smokes and foams and gels as a gimmick to distract from the fact that you didn’t actually make something balanced and tasty. But Le Syndicat used all of these devices to considered, delicious effect.