Zwanze Day is an annual Cantillon event where a special beer is simultaneously released at 50+ bars around the world.  Zwanze means “joker” in Dutch, and the event reflects the “wild card” spirit. The special beer changes each year, and tends to be an experimental lambic. This year was a “wild Brussels stout.” 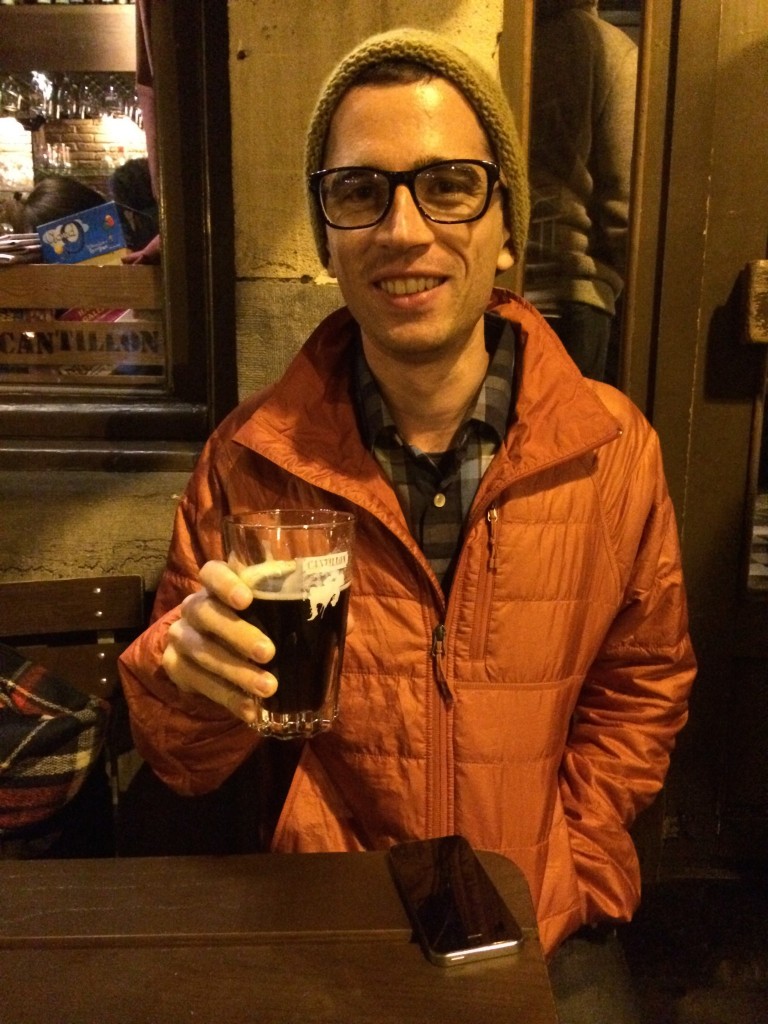 Toasting with the 2015 Zwanze beer

While we toasted in Belgium, our friends Brian and Josh in San Francisco celebrated with us from the other side of the world. We geeked out digitally on iMessage: 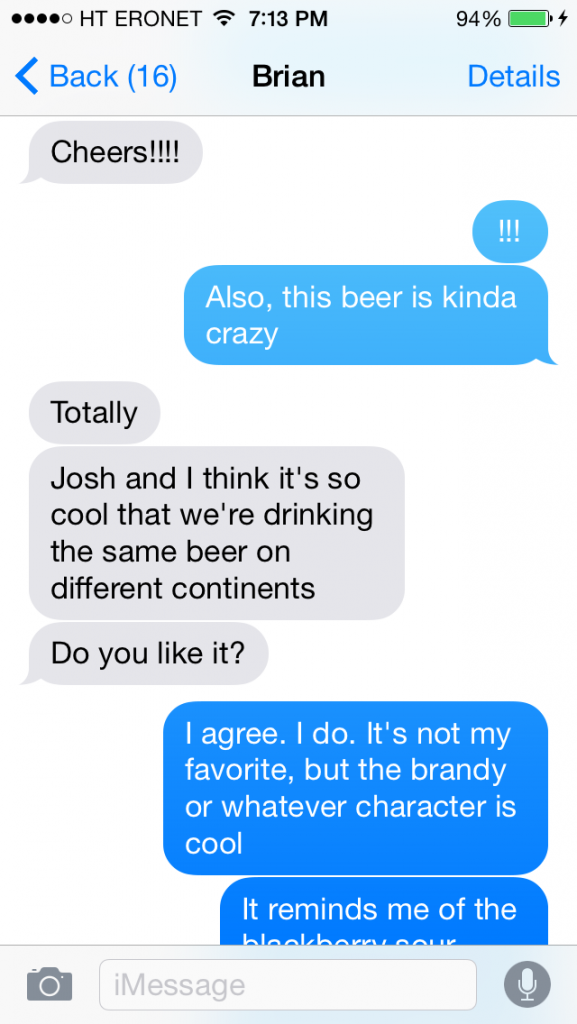 You can also read Brian’s state-side write-up of the event, complete with pictures of the puny American pours.

While you can get the Zwanze beer around the world on the day of the event, in Belgium they pull out all the stops for a three-day Cantillon-fest. A lot of rarities from the cellar were on offer at Moeder Lambic, a Brussels bar that works closely with Cantillon.. 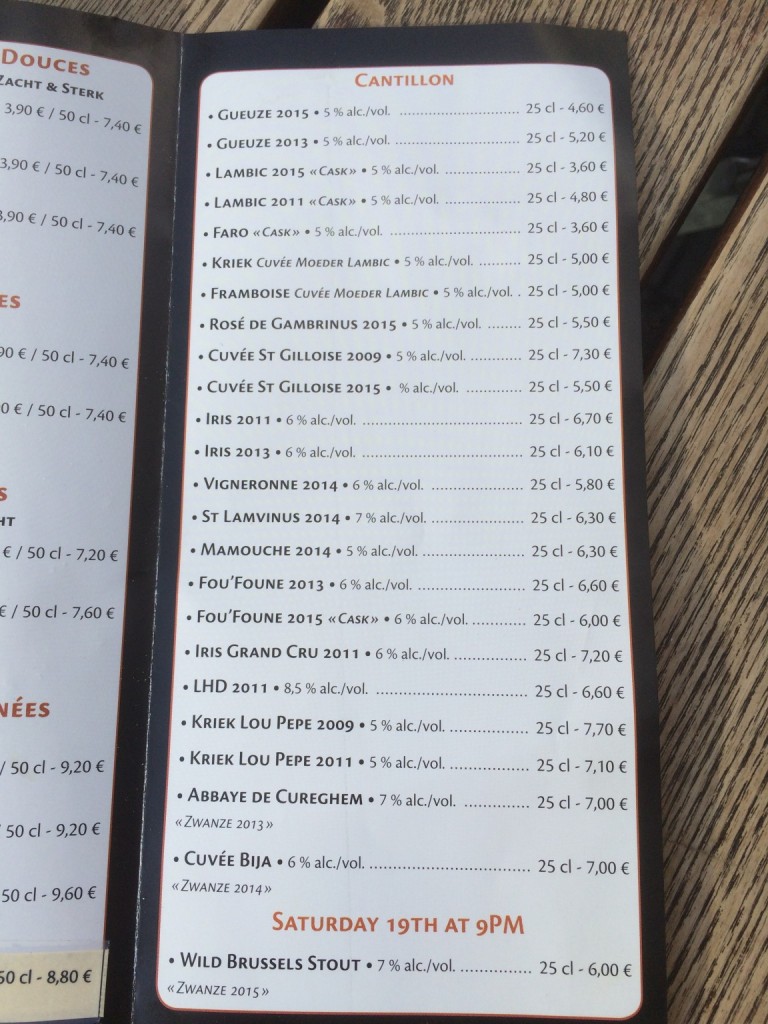 This is likely the best Cantillon list anywhere in the world.

We happened to catch a brief patch of sun at Moeder, so we made the best of it and powered through some ‘loons. 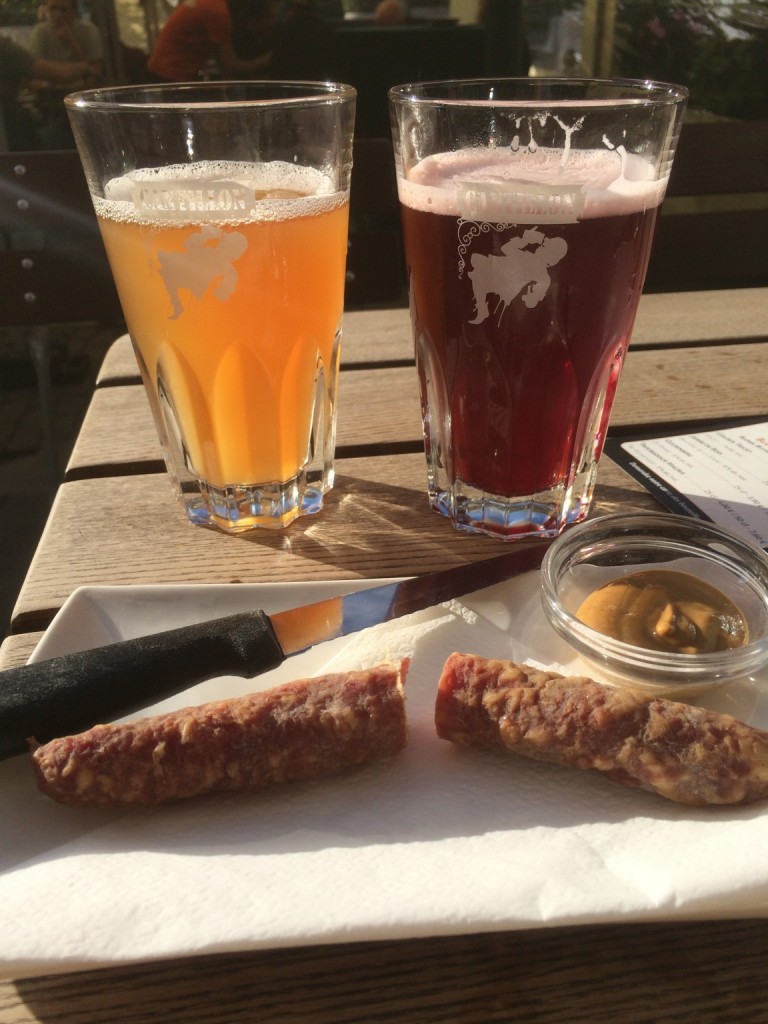 That bright orange beer on the left is summer in a cup. It’s a 1 week old apricot beer, and the fruit flavor was just bursting out.  Smelling it was a huge whiff of fresh ripe apricots. Just an outstanding beer.

On the right is a 6 year old cherry beer. The Lou Pepe series is designed to hold up to aging; they use extra fruit so the flavor will last, and unblended lambic so each vintage varies a little. The result is a really complex fruity beer that’s bone dry. 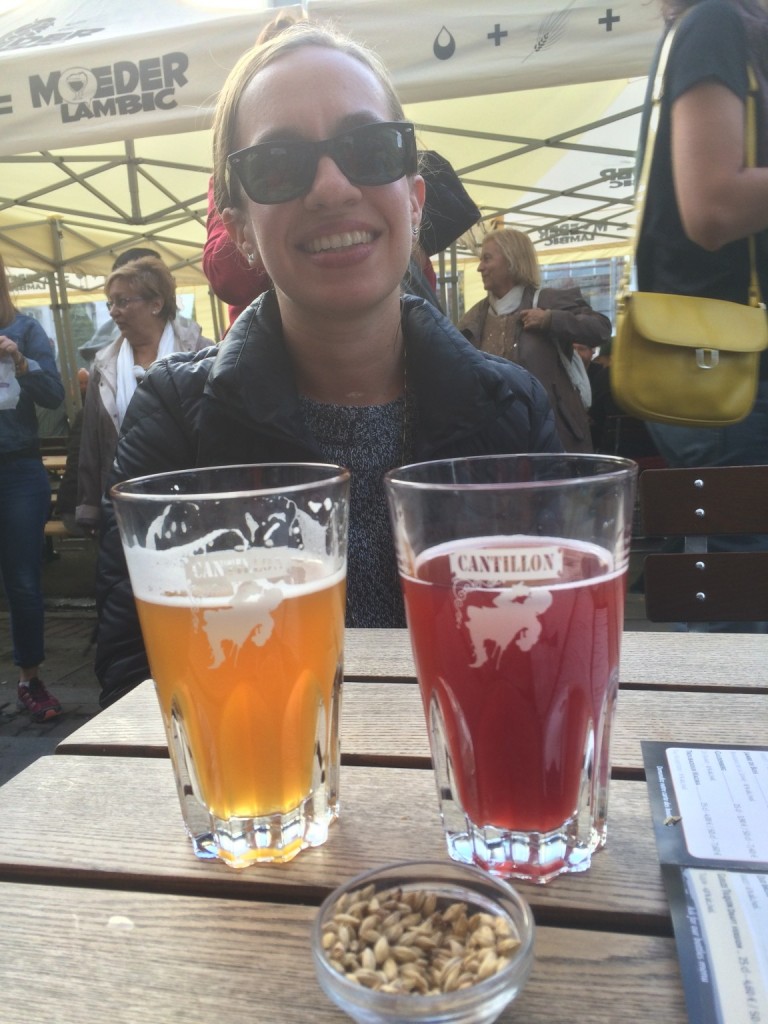 Last year’s Zwanze is also a dry-hopped beer (Grand Cru Iris base), with the addition of a small amount of cherries. The result is a delightful tart beer with hints of caramel. It tastes like cherry pie in the best possible way. 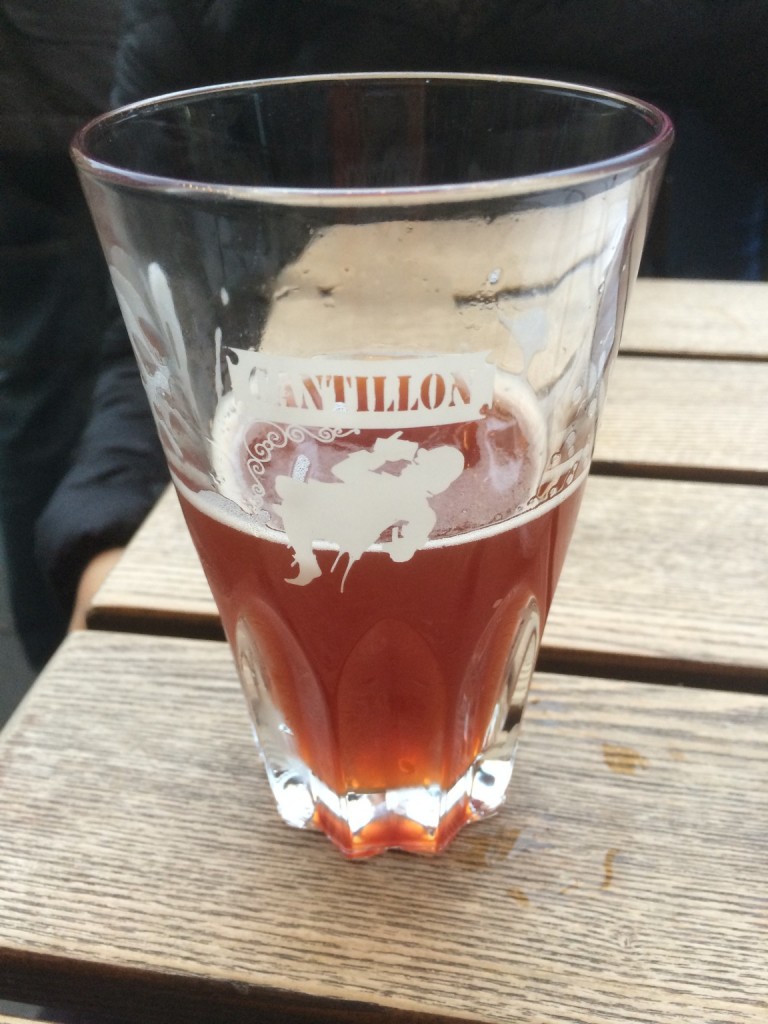 We were going to call it quits after two rounds, but Saint Lamvinus was on the menu, a beer I’d heard a lot about and never had the chance to try. Saint Lamvinus is a lambic with Merlot grapes aged in Bordeaux barrels.

This beer has the most amazing nose of anything I’ve ever tried. Tiara described it as “tromping through a muddy vineyard.” I took one sniff and got a huge smell memory of being a kid walking home from the bus after the rain. The taste is all grapes with only a hint of that earthy mustiness, but I kept going back to the glass just to smell it.  I need to figure out how to get my hands/nose on some more of this stuff.

Bonus: “The Best Beer in the World” – Westvleteren 12

For several years running Westvleteren 12 (or Westy 12 to the in-crowd) was rated #1 in the world by the beer community site Ratebeer (it currently hovers at a paltry #2). It is as obnoxiously rare as it is good; the beer is only sold by monks on site by appointment. Limit 1 order per person/license plate per 60 days. Yeesh.  We spotted a bar in Brussels that had a couple bottles available, so we gave it a try. 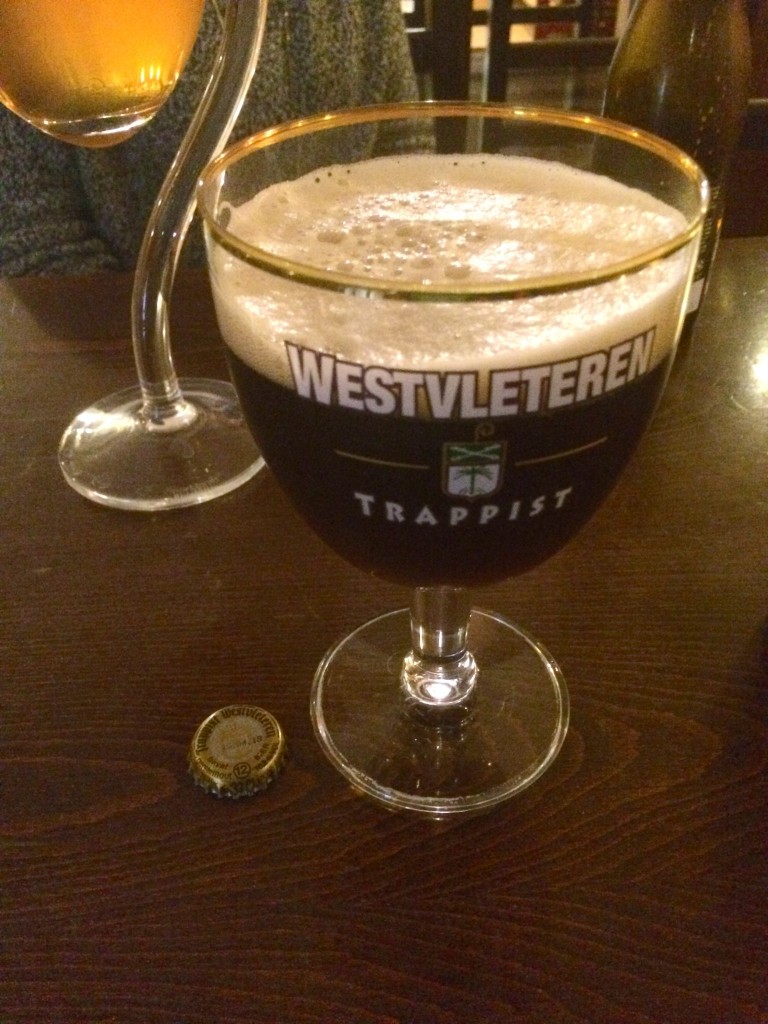 The only branding on Westvleterens beer itself is on the cap; the bottles are blank.

I wrote down my “tasting notes” like a good little beer geek. I got lots of banana, chocolate, molasses, blackstrap rum, and malt.  It was good, maybe even great. I would not choose it as the world’s best beer, but honestly the crazy dark/strong belgian beers are not my favorite category, so it probably never had a chance.

It is probably the best abt/quad I’ve had, YMMV. I’ve read that the recipe is the same as St Bernardus 12, which is a lot easier to get your hands on, so start there first before deciding you need to make a pilgrimage.

Alternatively, if you want a strong dark beer in a hurry, you can just grab a Chimay Blue at the airport. 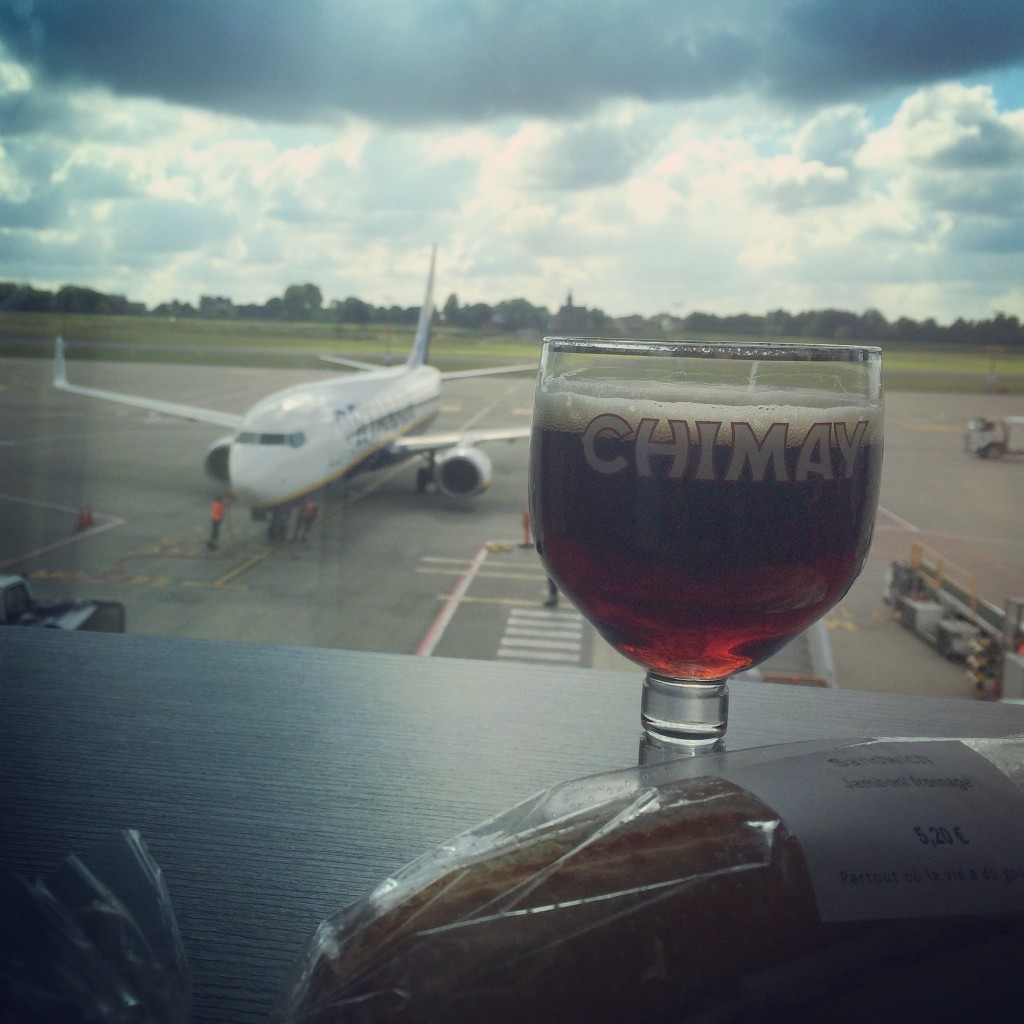 Oh Brussels, we will miss you and your amazing beer culture