We have previously established that I like Cantillon. So visiting Brussels meant a mandatory trip to the fountainhead, Brasserie Cantillon.

Unlike most breweries in Belgium, at Cantillon you can just show up and walk around on their “self guided tour.” 7 euros gets you a booklet, entrance to the brewery floor, and three ~6oz pours of lambic and geuze. 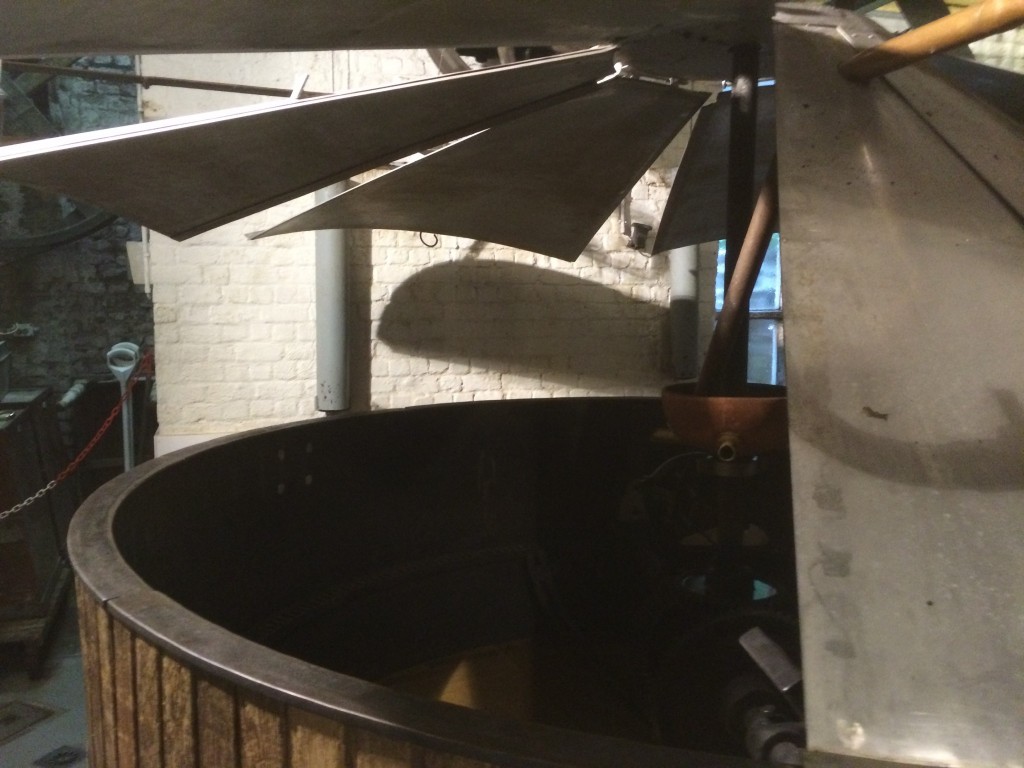 The mash tun; this is where the magic starts

The first step in brewing is extracting sugar from your grains by soaking them in hot water; you’re essentially making a big ‘ol batch of grain tea.  Some beers aim to emphasize grain character and use lots of flavorful and/or roasted grains – think stouts and porters. Cantillon brews lambics, which are all about the yeast and bacteria (henceforth “bugs”).  The grain bill is composed of mild grains (wheat and barley) that won’t compete with the flavors being produced by the bugs.

The sugary liquid that comes out at the end of this step is known as wort. 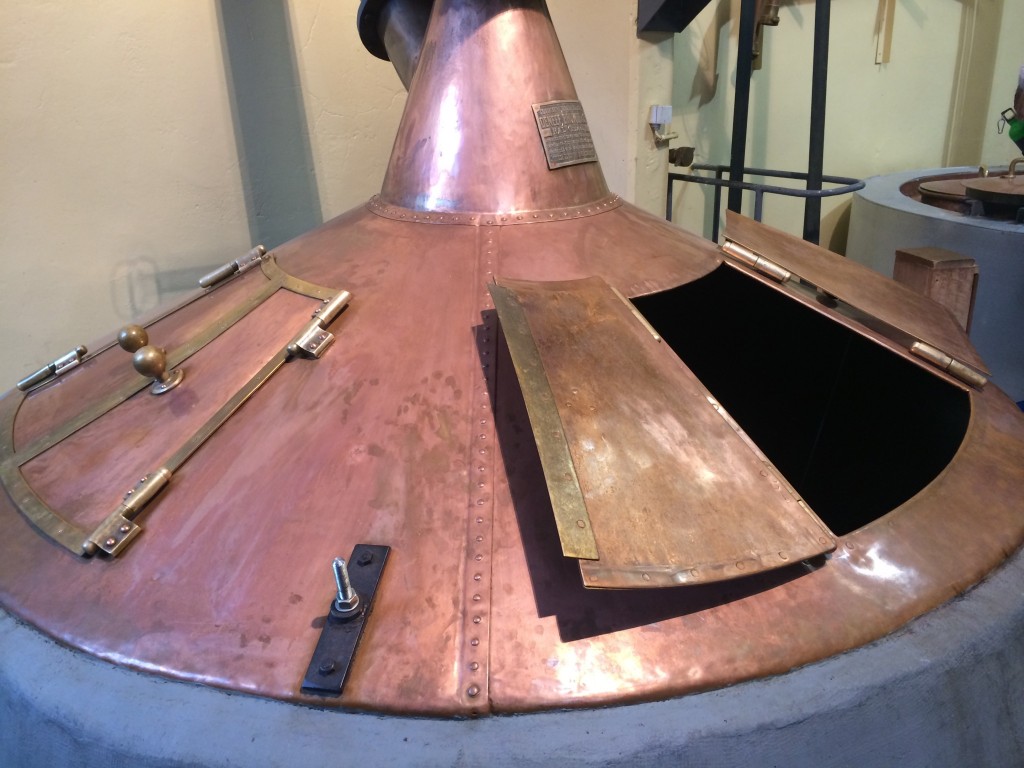 After you make your sugary wort, you need to boil it to sterilize the liquid to ensure you’re only adding the yeast and bacteria you want in your fermentation.

Boiling is also where you add your “boil addition” hops. Hops do three things to beer: (1) they have antibacterial properties that inhibit certain nasties from growing in the beer (2) they make the beer bitter, and (3) they impart flavor. Again, lambic is all about the bugs, so Cantillon uses hops that have been aged for 3 years to lose most of their aromatic flavors. 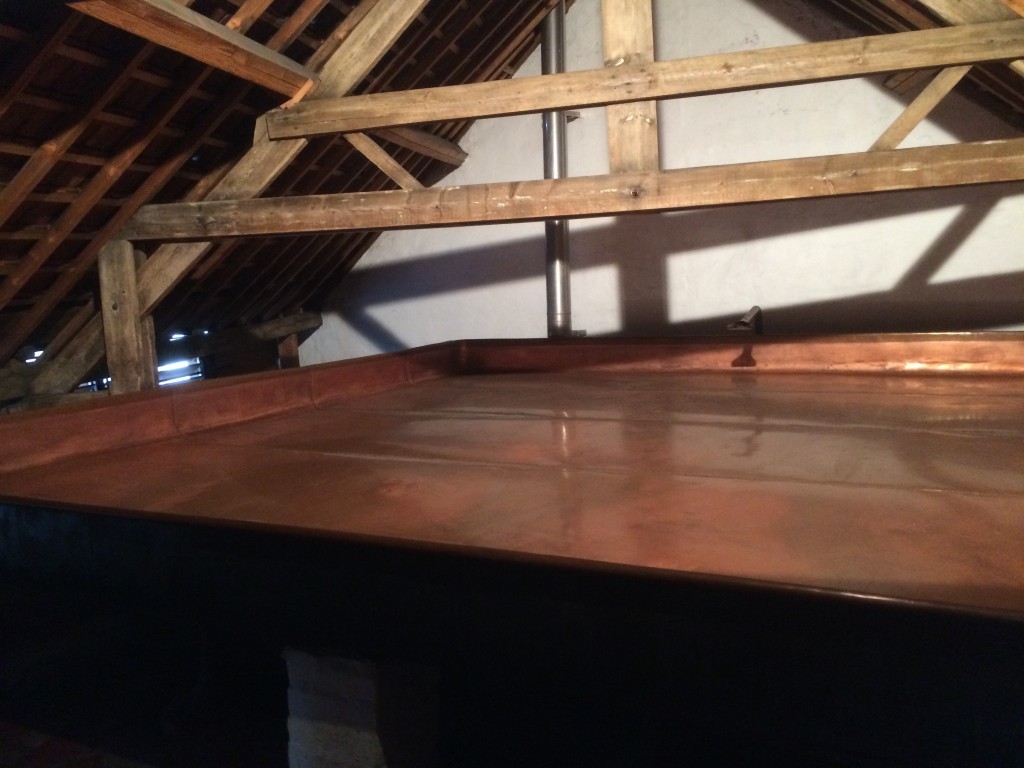 This is about half of the open inoculation vessel; it stretches right of frame

Nearly all beers are made by cooling down the wort and adding carefully selected yeast and bacteria in a sterile environment. Cantillon is not like most other beers. They employ a process known as “spontaneous fermentation.” In this case, they have a big shallow open-top copper dish in the attic that they pump the hot wort into. The high exposed surface area makes the wort cool down faster, and also lets in a bunch of yeast and bacteria from the air. These bugs will become the fermenters that turn the wort into beer.

It’s not all random chance; because Cantillon has been brewing here for over 100 years, the rafters above the vessel host colonies of yeast and bacteria friendly to the brewing process. 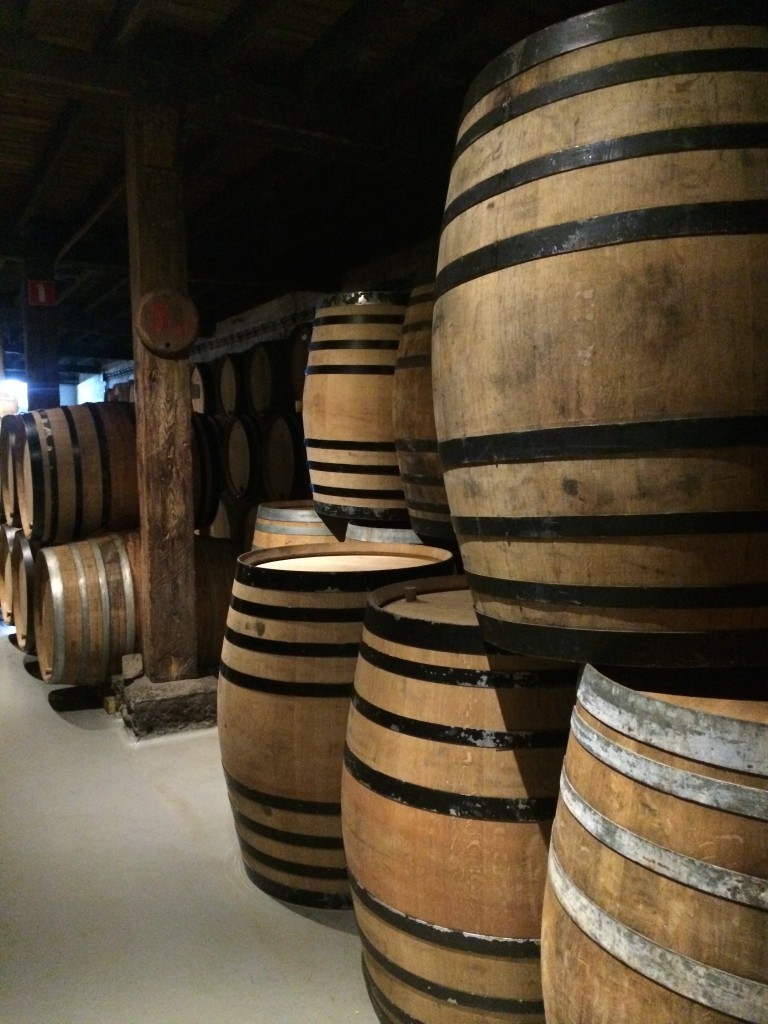 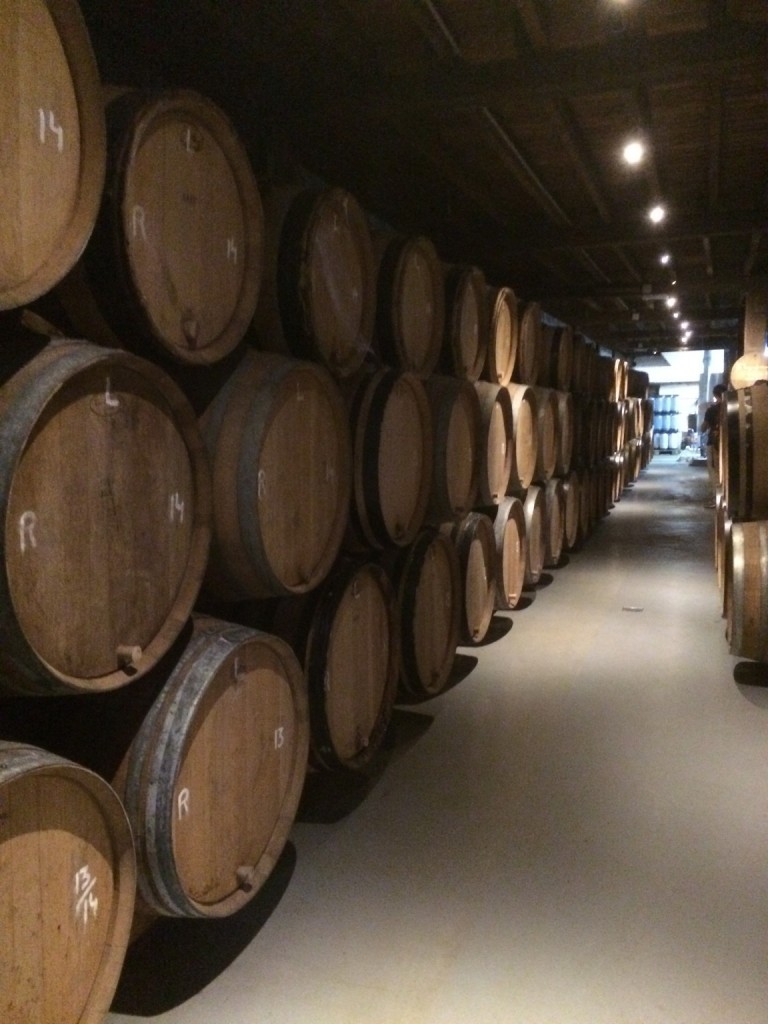 Once the inoculated with wild bacteria and yeast, the proto-beer is pumped into wooden barrels. It is in these barrels that the yeast and bacteria will convert the sugar extracted from the grain into alcohol – the miracle of fermentation! Wild bugs tend to act slower than their commercial counterparts, but they are given plenty of time to do their job (3 years, at Cantillon). While most beers have some unfermented sugars left at the end, Cantillon’s are incredibly dry, with nearly all of the sugars converted to alcohol.

Once the lambic is ready, it can be put into bottles and shipped out to the world. The classic beer made from lambic is gueuze, a blend of 1, 2, and 3 year old lambic.

Cantillon also bottles beer that have had fresh fruit. When we were there they had just received a bunch of wine grapes that they were destemming for addition to the lambic. 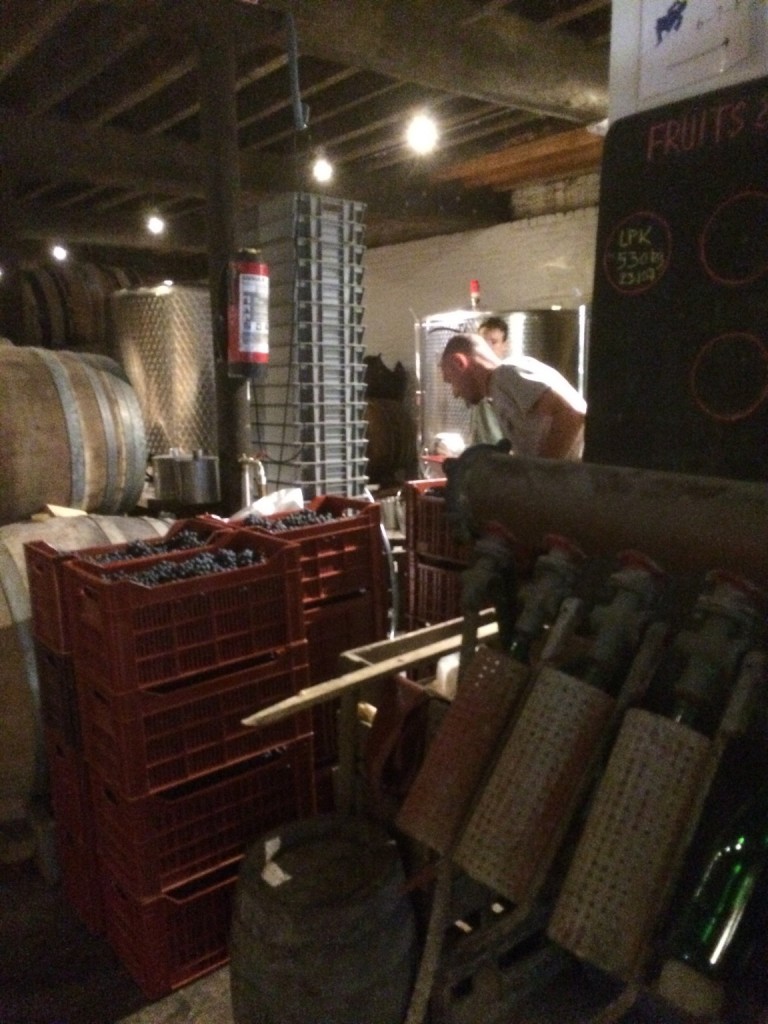 If you’re a Cantillon fanboy like I am, the picture of a wall of Fou’foune will make you start salivating. Otherwise I guess it just looks like a lot of bottles: 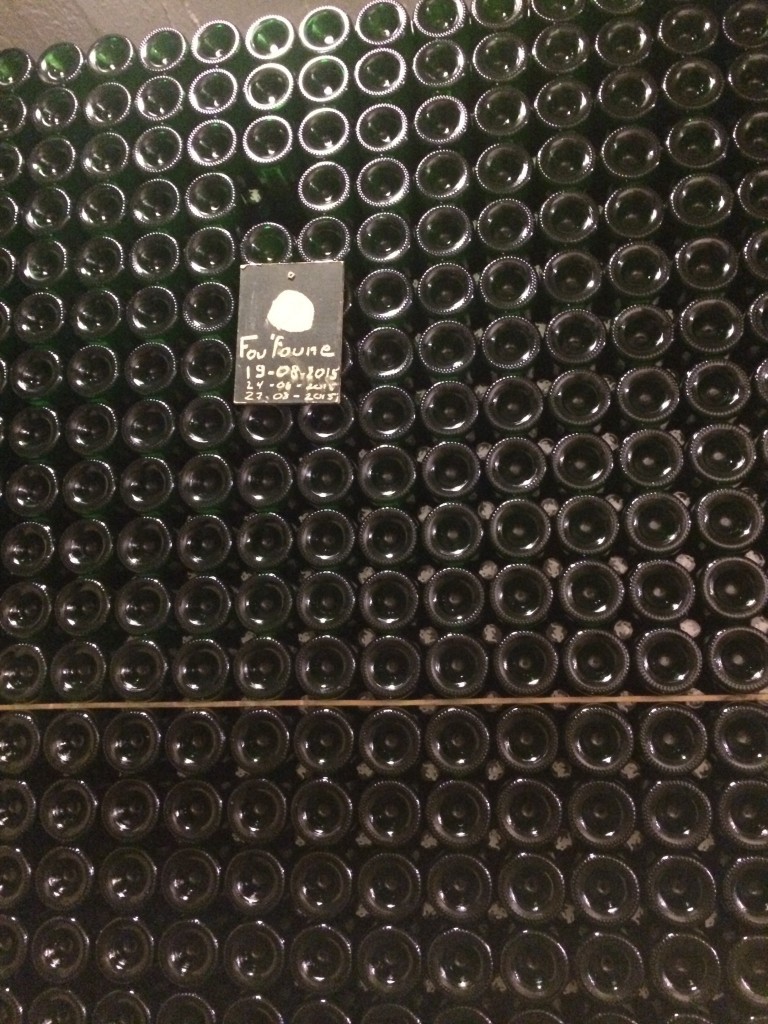 I have seen the promised land

The labeling operation has that classic old factory look. Here you can see labels waiting to be applied to those lovely ‘foone bottles. 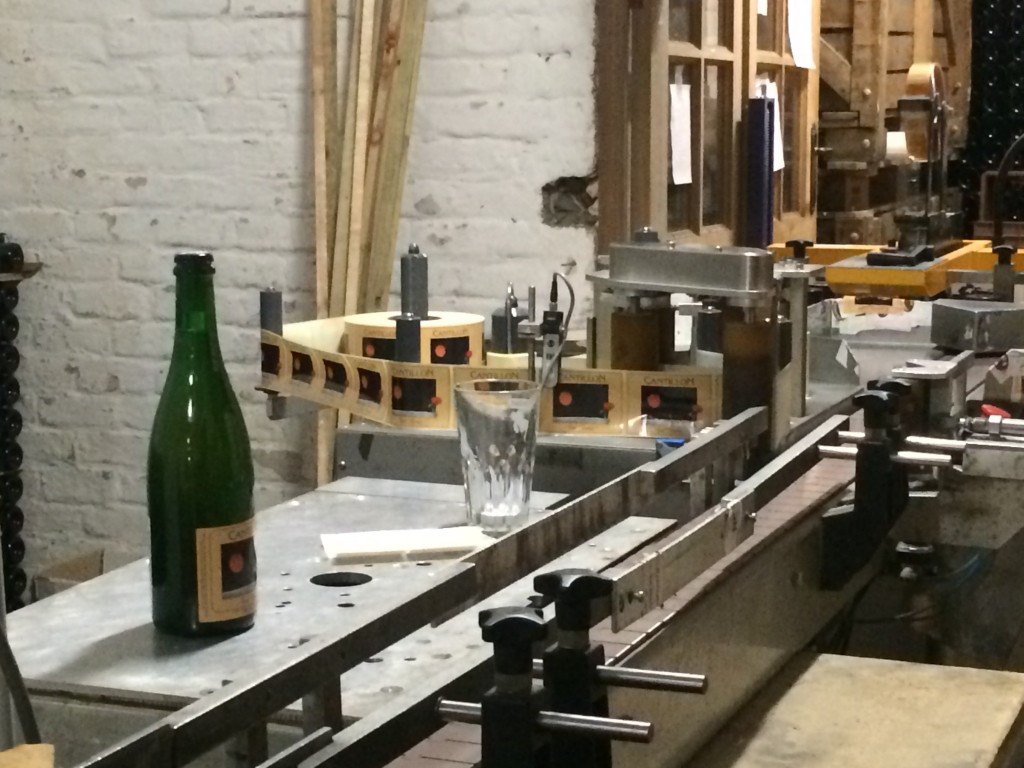 Love the beer glass next to the bottling line. Gotta stay hydrated on the shift.

Again, limited audience that will be excited about these things, but OMG WTF FOUNE JÉROBOAM! 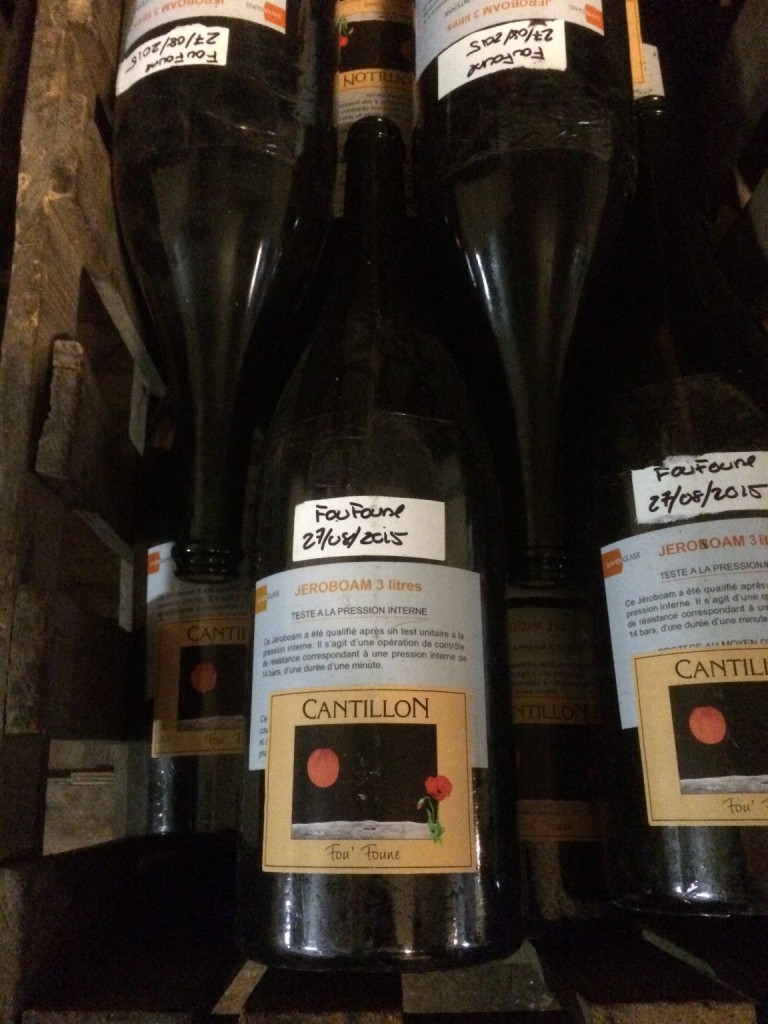 A jéroboam is 3 liters (twice the size of a magnum). Don’t worry, I had to look it up too. 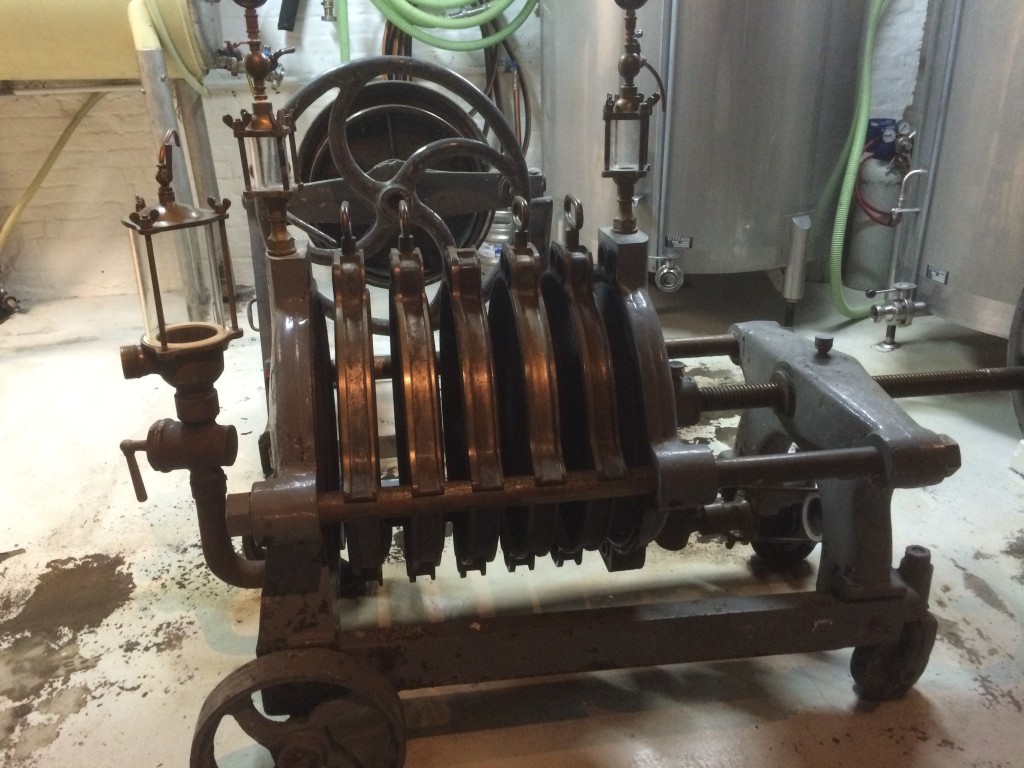 They called me mad at the academy. I’ll show them!

I saw this machine in the brewery. I have no idea what it is. It looks like something operated by a man with a white lab coat and unmanageable hair.

The most important step in any brewing process. Cantillon has a lovely little space downstairs for enjoying the wonders on sale. In addition to a nice tap selection (lambic, geuze, kriek, and st gilloise for ~2.5 EUR), they also have bottles of rare and hard to find stuff. 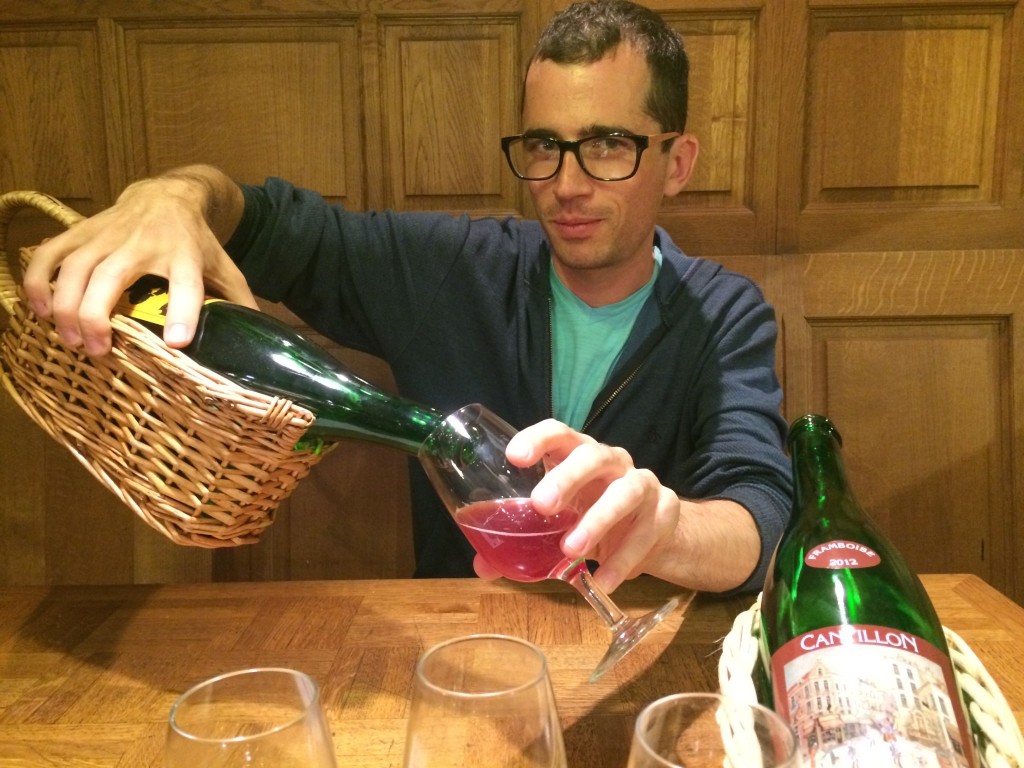 We started with the Carignan, a beer that has only been sold at the brewery itself. It’s a 2 year old single-barrel lambic with the addition of red wine grapes. Those grapes were front and center, definitely the most “wine-y” beer I have tasted. Just lovely. 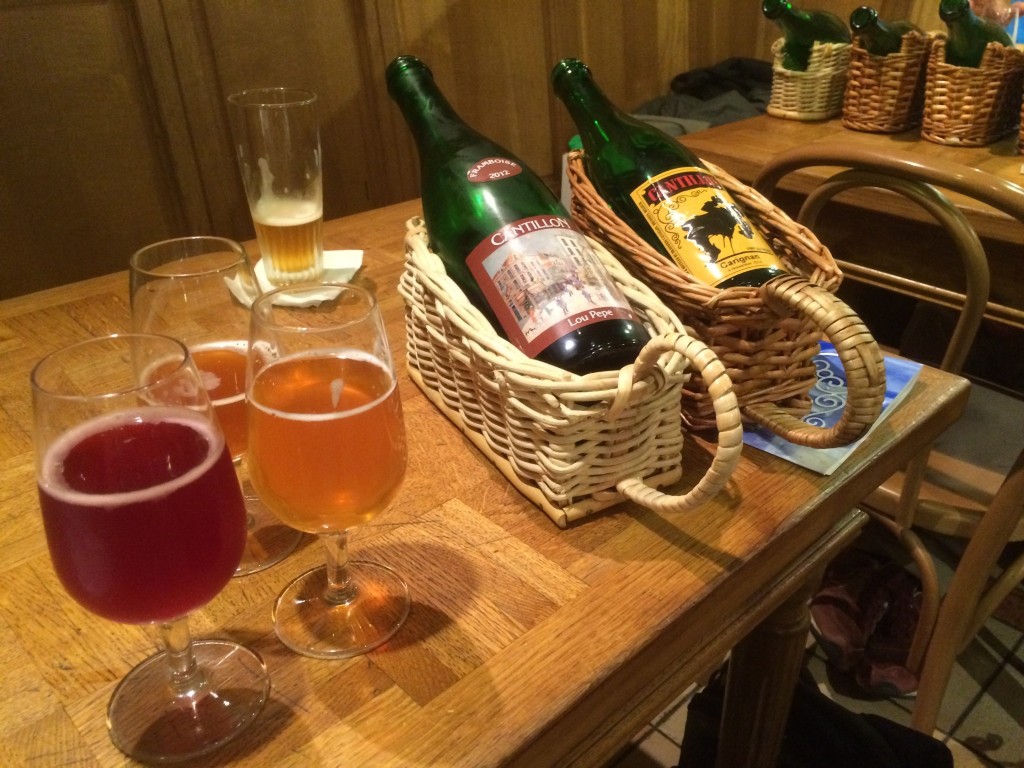 We also got a bottle of the Lou Pepe Framboise (think juicy funky raspberries), and did some sharing with other tables to sample more of the goods. We also tried:

Also a very important step. I got a case of the good juice. Now I just need to get it home. 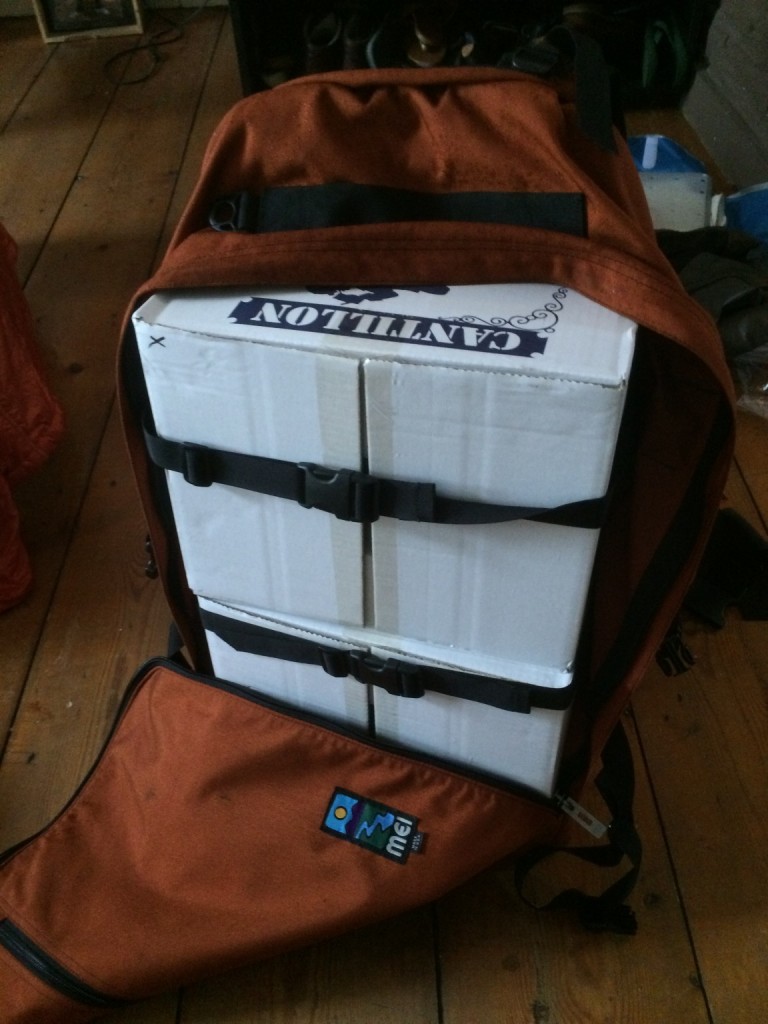 I still need to do a write-up on my excellent MEI Voyager pack, but the key take-away is it holds a case of Cantillon.

There is no reason not to go here if you are in Belgium. Even if you (*gasp*) don’t like sour beer, it’s a classic brewery that’s worth the visit.